"How did you write your book?"


"How did you write your book?"

I was RIF'd from my job as an accountant. I decided to seriously try writing as a career. The husband was a new paramedic, we had no children, we could survive on his salary while I tried.

First draft of the novel was finished. 45,202 words. I realized that this was too short. I also had the first 100 pages or so dedicated to one case, which I closed and wrapped up before embarking upon the next case. And NEVER came back to the first case or tied the two together. And I got called on it, by multiple readers, but I didn't know how to fix it. So I ignored it. (Not a good decision.)

I make a fictional blog for my MC's, intending to put fiction on it as "samplers." A month later I read several blogs advising NOT to do this because it is excessively harmful to your publication journey. I take it down again.

Got pregnant. Freaked out about everything.

Got unpregnant. Fetus never developed a heartbeat.  I was far more disappointed than I thought I'd be. Lost a few months to vague mourning and depression. But I am accepted to UNC Chapel Hill, and I start classes in August!

Figure out how the hell I can FIX the glaring issues of the split-personality novel, and all it will take is a complete and total rewrite, and insertion of about 30,000 words. No biggie!

I post hopefully on my class forum about starting a writing group. Two people respond. I am disappointed at first, but we start meeting. And they are fantastic. They start reading chunks of the novel and providing MASSIVELY AWESOME feedback.

I am RIF'd for the second time due to a larger company buying mine. The baby is born. Life is ridiculously complicated.

I manage to write 2,000 words on the novel for the first time since the baby showed up, and I practically throw myself a party. With chocolate chip cookies.

I happily note that I think my rewrite is about 1/5 of the way done. I am not correct.

Re-edited new version for Janet Reid's Liz Norris Pay it Forward contest. I should note here that the contest was the kick in the ass I needed to get the damn thing done. (Thank you Liz & Janet!)

I am selected as finalist #8 out of 10 in the JRLZPIF contest, and I pretty much pee myself for like a week straight. This could also be because giving birth weakened all my uterine muscles permanently and one good sneeze caused wardrobe changes.

I do not win. But the person who does gets published shortly thereafter, so I am heartened!

I stagnated here for quite some time. I continued querying. Sort of. By which I mean like two or five over six months.

I joined Sisters in Crime after re-reading through Janet Reid's and other people's blogs where they emphasized how important it was to join your professional organizations.

I enter a blog-Hop Query Contest called GUTGAA. I get two agent requests, and I am over the moon.  Both reject it later, one for language un-befitting a primarily Christian press, and the other for reasons I don't remember right now.

BUT TWO AGENTS LIKED MY QUERY. THIS MEANS IT MUST BE PERFECT NOW.  I really believed that too. I am so freakin' funny.

I keep querying, about five or six every few months, usually after I read a post by Janet screaming, "KEEP QUERYING. GET BACK TO WORK."

My short story is accepted into the local Sisters in Crime chapter's anthology. I am ecstatic as it will be my first publishing credit. Since I am in charge of submissions, I am also in charge of sending out acceptance letters. You're damn right I sent one to myself.

My husband leaves his job. We decide to take the chance to move to Canada and see if we can pursue a better life for us there.  I spend the next three months fixing up the house, getting ready to move, and purging everything we own.

We move to Canada. Right in time for what the Canadians describe as one of the worst winters on record.

My son is born. We are currently living in a friend's basement in Toronto.

I join the Toronto Sisters in Crime, because I am convinced it is a fantastic program. I go to the joint Christmas party between the T-SinC and the Canadian Crime Writers association, and win a door prize of thirty books. Which I carry home on the subway.

After enduring "one of the worst winters on record", we decide to move back home thanks to a job offer my husband received from from an employer he part-timed with previously and the fact our house hadn't sold yet.

Put the house back together, celebrate the lack of snow.

The anthology my short story was accepted for is published! WOO HOO!

BOOK SIGNING PARTY! My very first one.  Karen Pullen, the President of our local SinC Chapter encourages me to submit my novel to Five Star Mysteries. I decide what the hell, and do so, because I'm so frustrated at the fact that it takes me an hour to craft a single query letter, and I have about two spare hours a day to work on writer-stuff. 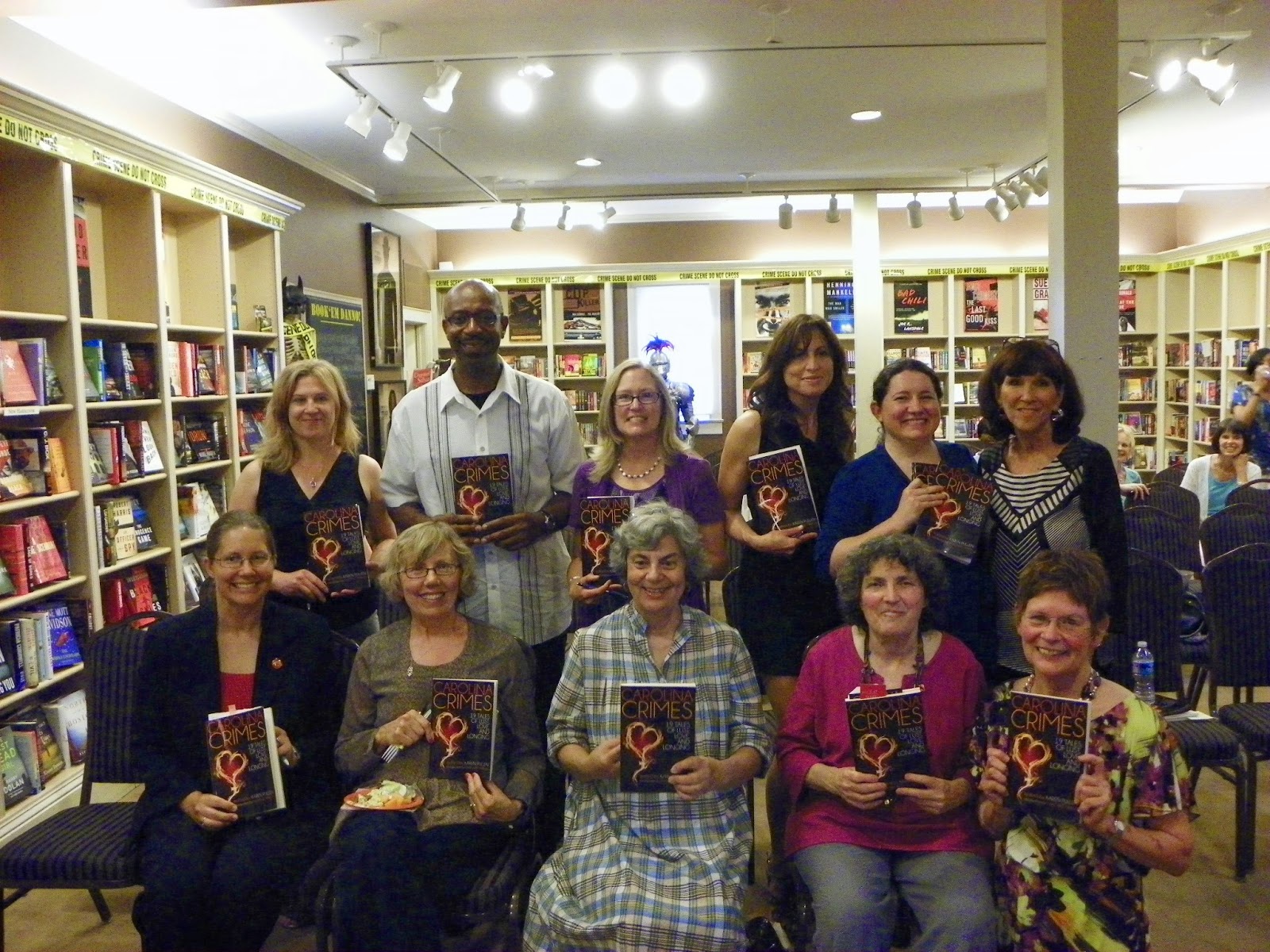 I get a reply from Five Star. They are accepting my book and I can expect to hear from a contracts manager shortly. My husband is annoyed by my lack of enthusiasm, as I have read far, far too much online about the increasingly worse contracts being offered new authors. Especially those without an agent.

And to date, I do not have an agent. I start going through and cleaning up my query spreadsheet, and send an "update" email to all the agents who I had yet to hear from on my query.

I hear from the editor who will be handling my book, and receive a sample contract! Janet Reid recently posted a blog post with resources for authors who don't have agents. I bought the book she recommended, and started going through the contract with book in hand and notepad on my knee.

Why I didn't accept the contract is a whole separate post that I will never make. Business deals are like dates. What may completely turn you off may be exactly what someone else is looking for, and that someone else might be you in five years.  It should not be taken as a denigration against Five Star. Their contract terms were not ones that I considered acceptable for me in the current publishing climate, but I went into the negotiations prepared to walk away if certain things were not on the table and with a contingency plan. In fairness I don't consider most of what apparently passes for customary contract terms in publishing to be acceptable.

Their reply letter made it clear that they weren't interested in negotiating the points that I considered deal-breakers, so I chose to walk away. I have since wondered if perhaps I gave up too easily, but I don't have a lot of free time and I find negotiating stressful as hell, so I chose not to go through it.

Side note: I do believe very strongly that if you sign a contract for a deal that you aren't happy with, you only have yourself to blame. If you sign a contract and you ARE happy with that deal? Don't let anyone else tell you differently. What's right for you is up to you to decide. I'm notoriously touchy about contracts, and I read EVERYTHING. Several times if I must.

I hired a professional layout and graphic design artist. She did an amazing job building a cover, custom dingbats, the internal layout and kerning, and all the good meaty stuff that makes a book a pleasure to read. She did a fabulous job and I have no hesitation in recommending her to any other writers looking into self-publishing.

I read business books, (Kristine Kathryn Rusch's Freelancer's Survival guide? Must have.) built a business plan, opened a business account, worked with Jennifer on the layout and cover decisions, opened accounts in all the online and print vendors I chose to work with, bought a domain name.

I start uploading files to all the vendors. Easiest and fastest? KDP Select. Most irritating? Kobo. We had four days worth of error messages to try and repair and their customer service has a 24 hour turn around time with at least two layers of "well, keep doing what didn't work the first time." We eventually solved it ourselves. Sort of.  iBooks is maddening in that you MUST be an Apple user or have access to a mac in order to download the software required to upload a book to their store. Luckily, Jennifer is an Apple user and was willing to help out.

My book is officially for sale on Amazon as an e-book. I don't want to announce it until a print copy is available.

I order proofs from Createspace. They ship the same day. (What?! Damn yo.)

My book is awaiting proof approval with IngramSpark and Createspace, but is for sale on  Nook, and Kobo,

I ANNOUNCE. I spam, I blather, I sob, I open a bottle of champagne I forget to drink. And then I get back to work on the second book, tentatively titled A Thousand Deadly Kisses, to be released in December 2014.


Posted by Britni Patterson at 9:13 AM

Britni Patterson
Hi! I'm a budding mystery author who loves cooking, heavy armored combat, medieval book arts, gardening, reading in all fiction genres, orchids, chemistry, classical piano, and cats. I'm also married to a paramedic and there are two small people around my house who insist on calling me mommy and making me clean their pee.